THE Senate on Friday passed the Dangerous Drugs (amendment) Bill, despite the Opposition’s intense scrutiny of, and disagreement with some provisions of the legislation.

During the painstaking seven-hour debate, one Opposition senator described the legislation as poorly drafted, calling for sections of it to be reworded.

Opposition Senator Marlene Malahoo Forte took particular issue with section seven of the bill, which she said could leave persons open to doing jail time, one of the very problems which the law is supposed to eliminate.

“When judges, whether at the magistrate level, or whether a magistrate exercising the jurisdiction of two justices of the peace in the petty sessions jurisdiction, are adjudicating on matters [they] don’t always have the law at their fingertips. Many things (can) happen, from my experience… we are talking about making life easier [for persons found in breach],” she argued.

But Justice Minister Senator Mark Golding insisted that no exceptions would be made for anyone who does not pay the fine imposed in the petty sessions court, if their case gets to that stage, as this would send a bad signal.

He said the same penalty that applies to all offences under section 57 of the Justices of the Peace Jurisdiction Act would apply to persons who do not pay their fines.

“It’s the same regime, except that we have put in a community service element, up front and centre, because that is what we would like to be the approach,” he stated.

Under the provision, if a person found in contravention of the law does not pay their fine of $500 within 30 days, they must attend a petty sessions court to answer charges. If the person does not have a reasonable cause for not paying the fine, they may either be charged $2,000 or ordered to do community service.

Senator Golding remarked that if the law gives persons “a bly” by not charging them with a criminal offence for being in possession of more than the allowable amount of ganja, then it is their duty to pay their fines.

Senator Malahoo Forte said while it was clear that possession of more than the allowed quantity does not carry a criminal record, the legislation was silent on whether failure to pay the petty sessions court fine would be an offence which carries a criminal record.

“I just wonder if that is what you really want to do… are we talking about putting possession and use of this small amount in the realm of criminality, where it has been for a long time? This is the kind of untidiness that leaves me with much concern,” she said.

“We say we are doing one thing, but in the end, we are not doing what we say we are going to do. We can’t give the impression to the public that we are treating a small possession of a small quantity in a certain way, but in the worst case scenario you are going to end up with a criminal conviction. It’s almost as if you’re giving with one hand and taking away with the other,” she insisted.

But Senator Golding remained firm on the matter.

“I draw a very big distinction between non-payment of a ticket, which is a very modest sum, and the thing for which you got the ticket — which is possession of a small quantity [of ganja],” he said. “It opposes the rule of law, to say somebody cannot pay their ticket, with impunity. I’m not in favour of it”.

In the same vein, Opposition Senator Kamina Johnson Smith expressed concern that forcing persons to go to court if they fail to pay their ticket would again burden the system, and defeat one of the purposes of the bill.

“Are we now replacing one burden with another… are we creating a system which is unenforceable? If these persons are being ticketed…[with] no place of employment, no address, but we are expecting them to go to the tax office and pay a certain sum, are the same police going to have to find them to go to petty sessions court? The question is whether there is not a better way, and whether we shouldn’t be looking at legalising this small amount,” she stated.

As for the matter of how the minister would determine who is a Rastafarian, an issue which Opposition Senator Tom Tavares Finson contested when the debate began in the Upper House a week ago, Senator Golding scoffed at the idea of Parliament ascribing any such definition.

“I would never be so presumptuous as to try and define Rasta,” Golding said. “It is within our capabilities in applying this law to do so in a just way. There are organisations that clearly represent members of that faith, and it is not beyond us to recognise who they are, and deal with them.”

Senate President Floyd Morris, in signing the Bill, said he welcomed the legislation, particularly for people like himself, who are afflicted with glaucoma.

“I’m certain that thousands of glaucoma patients in the island would welcome the passage of such a bill,” he stated.

The Bill, which was passed with five amendments, is expected to be taken to the House of Representatives some time after the budget debate, which opens on March 12.

The Government is hoping to see significant economic gains from the decriminalisation of ganja, particularly in the area of medicinal use, which is a US$2.5-billion market in the United States.

The proposed changes to the Dangerous Drugs (Amendment) Act will make possession of two ounces or less of marijuana a non-arrestable, ticketable offence, that attracts no criminal record.

Where the person found in possession of a small quantity of ganja is a minor, or an adult who appears to be dependent on the substance, they are to be referred to the National Council on Drug Abuse (NCDA) by the police officer issuing the ticket.

Additionally, the Bill prohibits the smoking of ganja in public places, and makes provisions for the granting of licences, permits and other authorisations to enable the establishment of a regulated industry for ganja for medical, scientific, and therapeutic uses.

It also provides for the creation of a Cannabis Licensing Authority, which will be responsible for developing the regulations governing the medical marijuana industry. 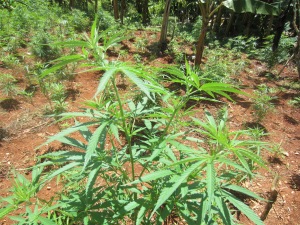